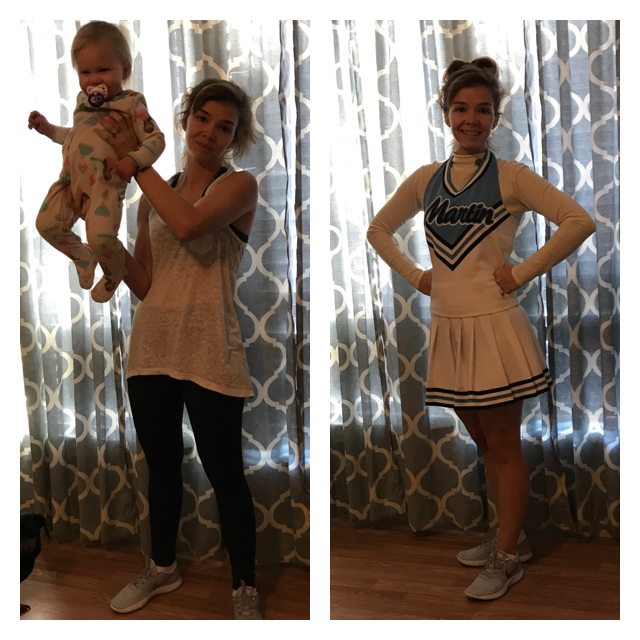 While rummaging through some boxes in search of a recipe for my mom friend, {{shout out to my girl Mallory!}} I came across an artifact from centuries ago, {{not really, more like a decade and some change.}} a fossil of a distant time preserved only by the thin, frail plastic ziploc bag it was folded half-heartedly and quickly shoved inside in an attempt to save time. I gasped when I saw it lying in such hopeless abandonment in the box. How that uniform meant EVERYTHING to a middle-school girl, me. I was that middle-school girl.

I still can feel the butterflies, nervousness, and excitement in my stomach and that filled the air as I shuffled across that gym floor to assume the position in front of the table of judges; shoulders back, chin up, smile big, and fists on my hips. Standing as tall as my 5’1 frame would allow me. Yelling as loud as my vocal chords could stand without exploding, pushing out all of the butterflies and nervousness with every stiff armed motion and cheerful chant.

I recall exactly where I was when the phone rang and the cheer coach confirmed my middle schoolgirl dreams and I also recall that’s when the abusive relationship with my body began, not that I wasn’t aware of my body before cheering but only that I became aware of how different my body was in my uniform compared to the other cheerleaders in theirs. I was prematurely, oddly pear-shaped, where others were blooming in their bras, I was blooming in my britches, and at that time big butts weren’t “in”.

I never starved myself and then binged, never forced myself to vomit, but I did tear myself apart; chastising myself for every calorie eaten and punishing myself by running and exercising, forcing the belief that my uniform must look the same on me as all the others; we were a squad and uniformity is essential in all aspects. Even appearance.

Then the pain; I felt the searing of muscles inside my thighs with every step planted on the asphalt road beneath, as I inhaled the cold air that became as shards of sharp ice pricking my throat, and the intense throbbing pain of my side stitch became my obsession.

It was anticipated, I longed for it, to run and feel all the pleasures associated with it. I scoffed at the previous limits I had as I ran past the checkpoints feeling not a bit fatigued, I had conquered them, I had conquered myself.

Then one day it was over.

I no longer had felt the need to be uniformed seamlessly with other girls. I quit comparing nutritional labels and viewing each morsel of food as a number, I continued running but not as a form of punishment but as a form of reward, reward for making it through a rough emotional day, reward for accomplishing all my work assigned that day, reward for not allowing that self-abuse to continue.

I ran my fingers across the seams,  flattened the pleats, sadden by how the half-top had shown its age by turning from crisp white to a dingy yellow. “I wonder if you can still fit it?” AnnMaria’s voice broke into my nostalgia, “I don’t know, let’s see.” She and I both amazed at how well it fit but more so at how loose the waist in the skirt was. “Do you like wearing that uniform Momma?” she asked smiling giddily, “Yea I guess, but I like my Momma uniform better, God gave me that one!”

Silencing the critic within isn’t easy, but it is possible. Even more so when you surround yourself with encouraging people who have the same goal in mind. Self-preservation. Surround yourself with those people, the ones who are striving towards the same ending, the ones who, when you stumble, are willing to pull you up by your arm or your hair depending on how far you fall, not the type who are setting the stumbling blocks in front of you so they can wallow in the muck of self-destruction with you. You must love God first, then yourself and others. Only in that order, because then will you be able to truly love yourself and in return be able to unconditionally love others; helping them to silence their own critic within.

iThere are no comments

This site uses Akismet to reduce spam. Learn how your comment data is processed.

Begin typing your search above and press return to search. Press Esc to cancel.